Have you ever watched an athlete pull up, holding the back of their thigh, with an agonising look on their face? Some of you may have even thought to yourself: “there goes his/her hamstring.” 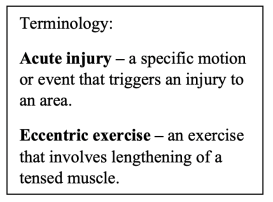 Well you are not alone. Scientists have also taken notice of the menace that are acute hamstring injuries and are devising methods to prevent the very scenario described above. In soccer players, hamstring muscle injuries are responsible for 12-16% of all injuries1 – with an injury occurring every 1000 hours of exposure (during the match or training)2. Hamstring injuries are particularly nasty because they have a habit of coming back (a group of Danish athletes showed they have 25% chance re-injuring it the following season)3. The question then remains, how to reduce the risk of these injuries? Well, a logical answer might be to strengthen the muscle, but which exercises work best?

Peterson and colleagues4 set out to test if eccentric strengthening of the hamstring, using an exercise called the ‘Nordic hamstring exercise’, can protect the hamstrings from new and/or recurring hamstring injuries.

They looked at 50 Danish soccer teams that were in two groups: Control and Intervention. The difference being that the intervention group were given a 10-week program of the Nordic hamstring exercise. The injury occurrences were then tracked over the next 12 months.

The study looked at soccer players, but one could argue that these findings can be carried over to any sport involving running. These types of injuries often occur while running and not necessarily during a sports-specific movement. It could then be suggested that the eccentric strengthening of the hamstring could help keep these nasty injuries at bay in any sport that involves running or sprinting.

This all sounds amazing, but it is important to consider some factors that this study did not do. Firstly, this study was open (i.e. all the teams – including the control – knew the aims of the study). This could have led to bias in reporting or training. Secondly, the authors did not record compliance to the program after the first 10-week period. This means that there was no way of knowing what sessions the teams did. For example, they could have used other eccentric strengthening exercises. This means that the Nordic hamstring exercise may not be the wonder-exercise it is made out to be.

However, a recent review by van Dyk and colleagues5 showed that including the Nordic hamstring exercise in injury prevention programs can reduce hamstring injuries by up to 51%.

To conclude, the Nordic hamstring exercise seems effective in preventing hamstring injuries. It is simple, cost-effective and would be easy to add to a team workout regimen. Like with any new exercise, it should be eased into the program to reduce stiffness the following morning. It seems a viable option to make that darn string harder to pull.

This site uses Akismet to reduce spam. Learn how your comment data is processed.